Why did General Semantics fail?

What was General Semantics? Why do I care about this question?

General Semantics was, in short, the previous rationality movement. Its purpose was to improve human rationality, and to use that to improve the world. The question interests me because I see certain similarities betwen general semanticists and current rationalists.

What are some similarities with the current rationalist movement?

On the one hand, this is a judgement call. On the other hand, yes, General Semantics has failed. Although it inspired writers whose novels remain, General Semantics doesn’t do much these days. In David’s Sling, the Institute plays at the level of national politics, in The World of NULL-A, General Semantics affects the Solar System. Back in reality, the Institute has previously considered becoming part of the Texan Christian University in order to survive Source. I think that the impression that this paragraph gives is true to reality. Compare:

Our seminar-workshops were usually about three weeks long, but gradually over the years, they became shorter as the pace of living increased in our culture. The length of seminars shrank to twelve days, then eight, and at the present time, they occupy only weekends. We hope to return to the longer schedules soon, to give time for the essential training we consider very important. Source

Anyways, here are some potential causes of its decline:

Two different organizations competing for the same funding, the ETC (a magazine) and the Institute for General Semantics. Initially, the magazine was supposed to pay part of its revenues, but at some point this changed. Drama ensued. Source. In particular, the main force behind that division, S. I. Hayakawa, manouvered himself into a position of power, then left to become the director of San Francisco State.

Cause 2: Their courses did not work.

I have the nagging doubt that, if General Semantics had worked, if it had given people superpowers, and if its transmission had been possible, they wouldn’t be in such a bad shape today.

As a comparison, consider Stoicism, and in particular, Marcus Aurelius’ Meditations. People find the book consistently useful because reading it gives one the generator for “I am ultimately the only one resposible for my feelings, and it is not a good idea to worry about things outside my field of control”, and this noticeably improves people’s lives. It’s a good piece of cultural technology, and thus survives.

A way to find out whether a course works would be to carry out a sufficiently powered randomized trial. However, I have found that this is not trivial.

Cause 3: Death of the Charismatic Leader.

After Korzbinsky died, there was Hayakawa, but, as mentioned, he had better things to do. It is not clear to me whether the other prominent members were as charismatic. It seems to me that the pattern: “death of a leader leads to a slow decline” is not uncommon.

Here is a quote from Hayakawa:

the Society, in any case, will continue to be the most effective agency for spreading general semantics — IGS or no IGS. GS is bigger than AK, MK, or any one of us, just as the theory of relativity is bigger than Einstein or any of his students. And the Society, which is built on the subject and not the man, will survive as long as the subject survives. It was structurally conceived that way, planned that way, and ETC. is run that way. And by running for president, I wish to re-assert this policy.

Note that there is a prediction in there: “And the Society, which is built on the subject and not the man, will survive as long as the subject survives”. Without the man, the subject only survived for a time, it seems to me.

Cause 4: Not enough people attained mastery.

(…) I would guess that I have known about 30 individuals who have in some degree adequately, by my standards, mastered this highly general, very simple, very difficult system of orientation and method of evaluating - reversing as it must all our ‘cultural conditioning’, neurological ‘canalization’, etc.(…) Source.

…To me the great error Korzybski made - and I carried on, financial necessity - and for which we pay the price today in many criticisms, consisted in not restricting ourselves to training very thoroughly a very few people who would be competent to utilize the discipline in various fields and to train others. We should have done this before encouraging anyone to ‘popularize’ or ‘spread the word’ (horrid phrase)… Same source.

This relates to: CFAR not spreading their manual, Effective Altruism not wanting to become mainstream. It doesn’t seem such a bad strategy to follow the (implicit) advice of one of the most capable general semanticists as she looks back and thinks about what she’d do differently.

An Aikido master visited our dojo and he stood like a mountain, towering above me, even though I was much taller. He exhuded an aura of power, and there is a sense in which I want that. There is another sense in which I don’t want that because I do not want to dedicate my life to Aikido in the same way that the master has.

Cause 6: The movement didn’t give things to do to its members.

You could write articles for ETC, organize a local chapter, try to become an instructor. There were things to do. But maybe not enough. The Catholic Church has options ranging from light involvement: reading texts at Church, being part of a propagandist organization, taking part in youth camps, to total commitment: becoming a priest, a monk or a nun. Similarly, if you want to devote your life to furthering the interests of the Democratic Party, it seems to me that you can do that. The ability of a movement to suck as much energy from its participants as they can give is not necessarily a positive attribute, but I think it’s one which contributes to its survival.

Cause 7: Because the important insights keep being found again, and again, and General Semantics didn’t have anything unique.

It seems to me that the basic insights of General Semantics have been found again and again by CBT, meditation, Internal Family Systems, Nonviolent Communication, Foucault, good anthropology. I think you could even get them from Heidegger’s essay Plato’s Doctrine of Truth if you stared at it hard enough. The answer to “is General Semantics the best at what it does?” might turn out to be: “no”.

Cause 8: Not enough money.

There might not have been anything wrong with General Semantics per se. If a random millionaire had given them some money at a crucial moment, they might still be alive and flourishing.

Personal curiosity takes me up to here. Even though reverse stupidity is not intelligence, the above are what seem to me to be some potential failure points which the current rationality and effective altruism movements might want to avoid. It might or might not be overkill to hire a historian for a deeper analysis. Additionally, it might or might not be worth it to go fishing for techniques in Korzybski’s Science and Sanity or in Hayakawa’s Language in Thought and Action, or to directly ask the IGS for techniques.

Addendum: Are there any superpowers worth stealing?

In Here is something about general Semantics Source, by Steven Stockdale, among other things a past director of the Institute of General Semantics, he talked about how we perhaps could:

It is unclear to me to what extent GS delivers, but it seems to me that there is some stuff that could be translated into, f.ex., CFAR techniques. Here are some nonexhaustive examples, taken from the above-mentioned book. Because I selected the book for ease of reading, and because I wrote the following within an afternoon based on my notes, potentially useful stuff will be missing.

Bruce Kodish led the sessions dealing with experiencing on the silent level. One exercise was seemingly quite simple. We were told to pick out a stone, bring it to class, then for a few minutes simply experience the stone on the silent level. In other words, to use our senses without verbalizing our reactions to our senses. My inability to accomplish this simple task was enlightening. It emphasized to me how language can get in the way of our moment-to-moment experiences with “what is going on.” It also demonstrated the extent to which I generate meanings for things. While I was unsuccessful in shutting off my verbalizing, I was quite proficient in coming up with all kinds of thoughts-and-feelings-and-meanings about an ordinary, arbitrary rock. If I can ‘make up’ so much meaning for a random inanimate object, perhaps it would be appropriate for me to be hesitant and inquiring in my future evaluations of relationships with more animate beings.

General Semantics has several ladders, which illustrate different levels of abstraction. For example:

What Happens ≠ What I Sense ≠ How I Respond ≠ “What It Means” 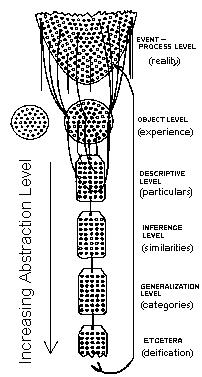 Here is an example of these ladders being used:

What this GS stuff meant to me, at that particular time, was that I didn’t have to be consumed with guilt over the fact that I had decided to end my marriage. Divorce didn’t have a predetermined meaning — our daughter wasn’t forever doomed to be neglected and miserable; I didn’t have to walk forever with my head bowed, ashamed of taking actions to further my own personal happiness; my wife didn’t have to forever grieve over what I had ‘done’ to her. It was certainly possible that each of these outcomes could occur, but they were not unavoidable consequences of the event called divorce.

In linear algebra, there is the concept of a vector space. I sometimes get the impression that I’m a 5-dimensional agent solving problems in 40-dimensional space by first finding a suitable projection. One of the points of General Semantics is that complexity gets simplified all the time, and this metaphor helps me remember that.

A couple of good quotes:

If you are distressed by anything external, the pain is not due to the thing itself, but to your estimation of it; and this you have the power to revoke at any moment.

The trouble with people is not so much with their ignorance as it is with their knowing so many things that are not so.

I am free, no matter what rules surround me. If I find them tolerable, I tolerate them; if I find them too obnoxious, I break them. I am free because I know that I alone am morally responsible for everything I do.