Inside a ramshackle hotel on the Fylde coast, a group of guests are plotting to save the world.

Busy tapping away on their laptops amid tables stacked with board games and juggling balls, the garish 1980s carpets, wonky staircases and tasselled ceiling fans cannot distract them from their goal.

This is the world’s first effective altruism (EA) hotel.

Faded portraits of dogs clash with floral wallpaper while charts detailing yoga timetables sit alongside to-do lists including aims such as “solve cancer”, “eradicate malaria” and “use gravitational waves to renew cells such that aging becomes a thing of history”.

The Times was granted exclusive access inside the hotel in Blackpool to learn about the people staying there and their mission.

He added that the main topics that the worldwide EA community targeted were humans (involving issues such as global poverty and health), animals (veganism and factory farming), far future (runaway artificial intelligence that could render the human race “collateral damage”), mental health and growing the international EA community.

Mr Colbourn, 37, a former 3D printing entrepreneur, bought the 17-room Athena Hotel for £100,000 after cashing in his cryptocurrency, ethereum, which jumped in value last year.

He invites EA devotees from around the world to pitch their ideas in exchange for living at the hotel free of charge for up to two years. Mr Colbourn has enough cash to fund the project for a year. After that, he will be relying on the goodwill of the international EA community.

Vegan food, beds and group activities (Friday night pub visits, and board games) are offered to guests while they work on their projects. His guests, however, are neither hippies nor are they dreamers searching for world peace. They are mostly scientists, mathematicians and tech whizzkids with a penchant for finding tangible solutions to civilisation’s biggest problems.

In a quiet annex, sat on a musty red velvet sofa, a molecular biologist from Montreal was figuring out how best to prevent humanity from the onslaught of “intense suffering”. Next door, a gifted teenager from Madrid was spouting theories on how best utilitarianism can be implemented in society while juggling. Nearby, a fellow guest was wondering how best to protect civilisation from the dangers of AI and biotech.

Each night, they climb the narrow slanting staircase to sleep in bunk-beds or small single beds, lending the hotel an atmosphere more akin to a youth hostel for geniuses.

The EA community are more accustomed to hubs in cities such as Berlin, London, Melbourne, New York, Oxford, San Francisco and Vancouver. Yet the international guests in Blackpool are intrigued and charmed by the climate, arcades and piers that the seaside town offers.

Nuño Sempere, 19, from Madrid, is working on a project for the European Summer Programme on Rationality. He said that without the EA hotel he would never be able to continue his work.

David Kristoffersson, 36, who is originally from Sweden, is forming a body called Convergence, focused on investigating the development of advanced technology and its impact on society.

He said that he had spent time with the EA community in London and San Francisco, but the international hotspots face stiff competition from Blackpool. “It’s charming here,” he said. “There’s good people and it’s got the sea and old buildings”. 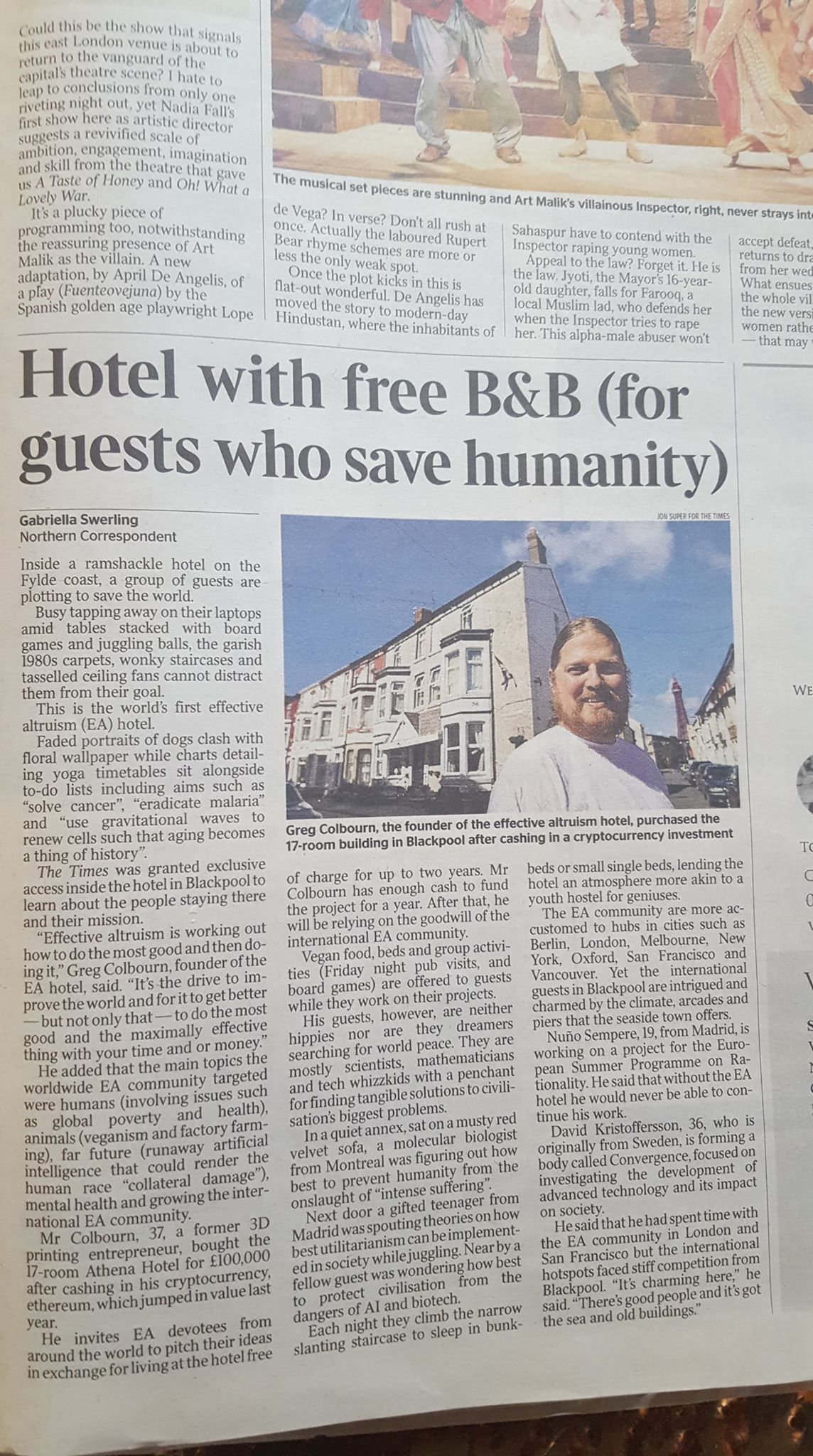