On the Recalcitrance of Granularity and Knowledge Integration - An Answer to Sebastian Benthall’s “Don’t Fear the Reaper: Refuting Bostrom’s Superintelligence Argument”

In his criticism of Bostrom, Sebastian Benthall shows how considering recalcitrance, the resistance of a system to improvement, is potentially useful when thinking about intelligence growth. Here, I consider the recalcitrance of granularity when making predictions, and construct a simple toy model in which an agent with higher granularity amasses all the resources of a toy world. With less depth, I also consider the recalcitrance of knowledge integration.

Benthall focuses on prediction as well-studied problem and an important part of what it means for an agent to be intelligent. He then considers the recalcitrance of accuracy, speed, prior and data. Seeing that the recalcitrance of the first three tends to infinity at the limit, he concludes that an intelligence explosion is not possible.

The factors he considers are: accuracy, speed, prior and data. For clarity, he defines accuracy as:

and, with respect to its recalcitrance:

It may be possible for a system to inspect itself and determine ways to modify its own algorithm to make it more accurate at computing a Bayesian update. However there is a hard limit to improvements of this kind. No system can compute a Bayesian update more accurately than computing it perfectly accurately. Therefore, in the limit, recalcitrance of computational accuracy is infinite.

I think this conflates several different concepts, and that a better word for “faithfulness to the mathematical formula that defines its goal” would be “fidelity”.

There are other related concepts:

Depending on whether you take those two concepts to be included in Benthall’s definition of accuracy, we’re either fleshing out his definitions or showing that they’re not exhaustive. This doesn’t really matter to the thrust of our argument.

A scenario I have in mind, in which calibration, granularity and fidelity can be tracked separately, is:

Note that there are two related but different aspects:

This is because we are working with percentages, which are in some sense not the natural unit. We could do our analysis in bits, units which measure the amount of evidence associated with a given amount of information, and in which the two things above are one and the same. Additionally, for a human, it’s implausible to be able to distinguish between 50.1% and 50.01%, but not as much between 0.1% and 0.01%; working with bits we wouldn’t really have tht problem. But because the conclusion changes if we do our analysis in percentages, and because people are more used to percentages, we’ll leave that be.

We will construct a toy world in which that advantage might prove decisive. It is meant to simulate a stock market, in which trading a stock is instead a bet that that stock will not go up, with many humans and one AI. Because we only care about the relationship between humans and the AI, we can put all the humans in one basket, as we don’t care what transactions they make between themselves. So we have:

We can write this in R:

What is the expected gain from each bet?

We can also write this in R:

And we can calculate the average as:

Is this exploitable “in practice”? High-frequency trading, with a single company making more than a million trades a day, suggests it is.

Less than one millisecond per trade.
Last year, Virtu Financial, a high-frequency trading firm, earned $732 million trading spread across more than 11,000 assets and at least 225 exchanges. At times, the Company would process as much as 5 million trades per day. Source: https://www.equedia.com/how-fast-is-high-frequency-trading/

We could add aditional complications, such as:

or some other type of error term.

However, all in all, I don’t think that the conclusions would change much: Differences in granularity are exploitable.

Question: If the human’s wealth starts off high enough (say, $100 trillion), and the AI’s wealth start’s off low enough (say, $1000) is a the advantage of going from 1% to 0.1% granularity enough that the AI can take over just by making a series of such bets? The answer turns out to be yes, if the AI is allowed to bet a percentage of its wealth. See Gwern on the Kelly criterion.

Within two million trades, and starting with $1000, the result is: 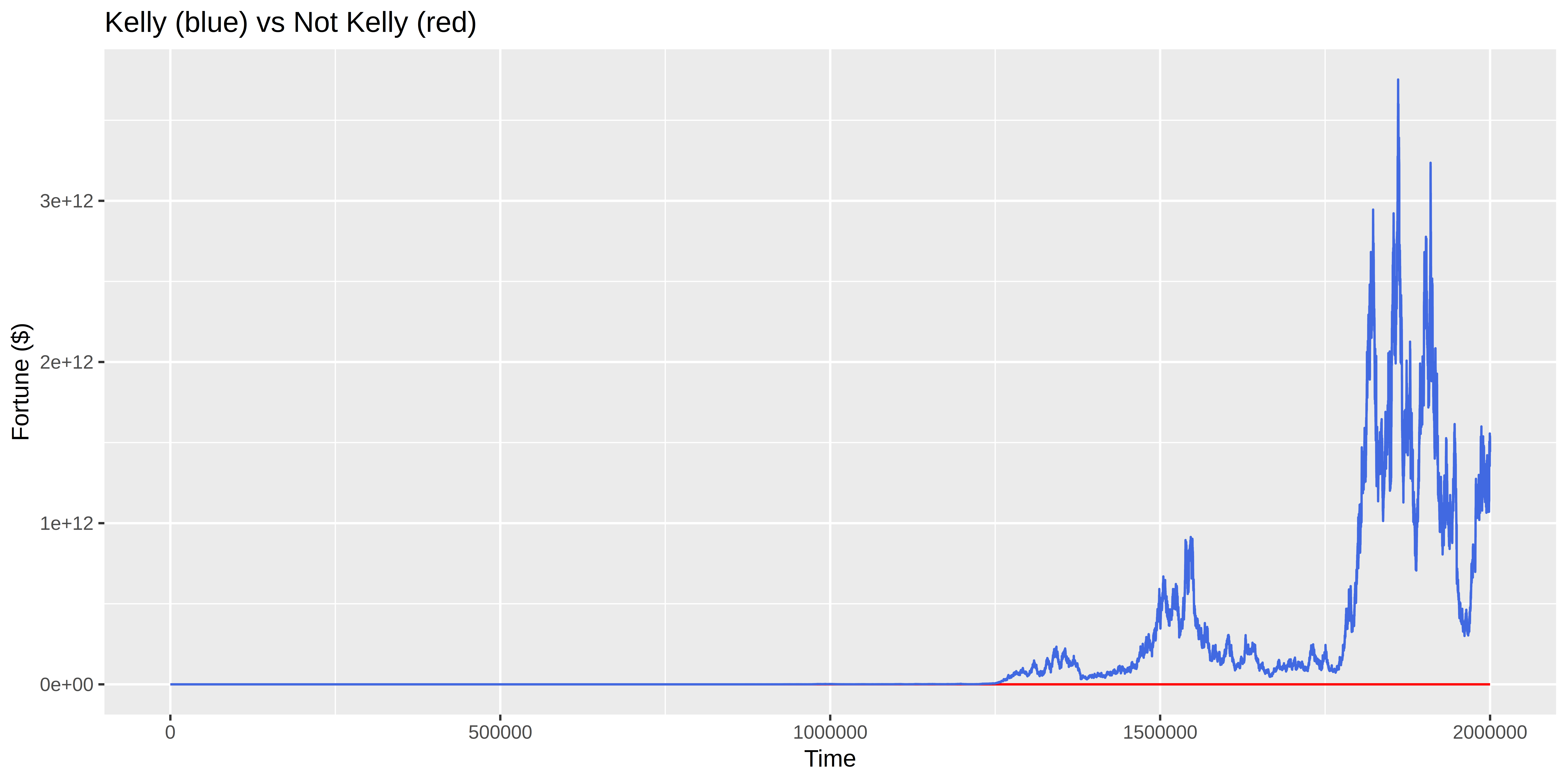 And, in a base 10 logarithmic scale: 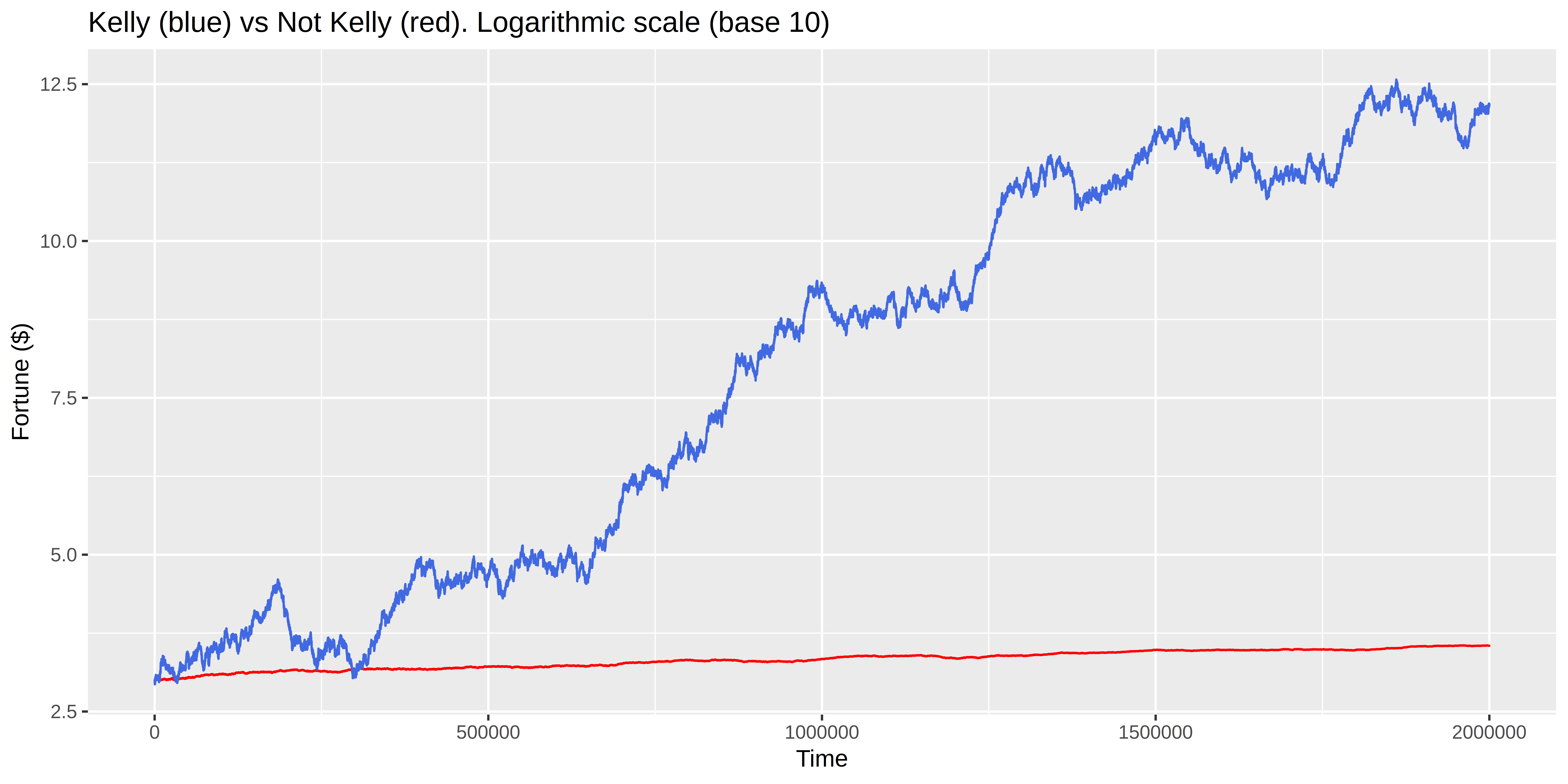 So the player which has an advantage of 1%->0.1% granularity can take over the toy world.

A note on the Kelly criterion.

Additionally, we have learnt that the Kelly criterion is batshit insane. Sure, it works long term, but consider the first 1000 bets: 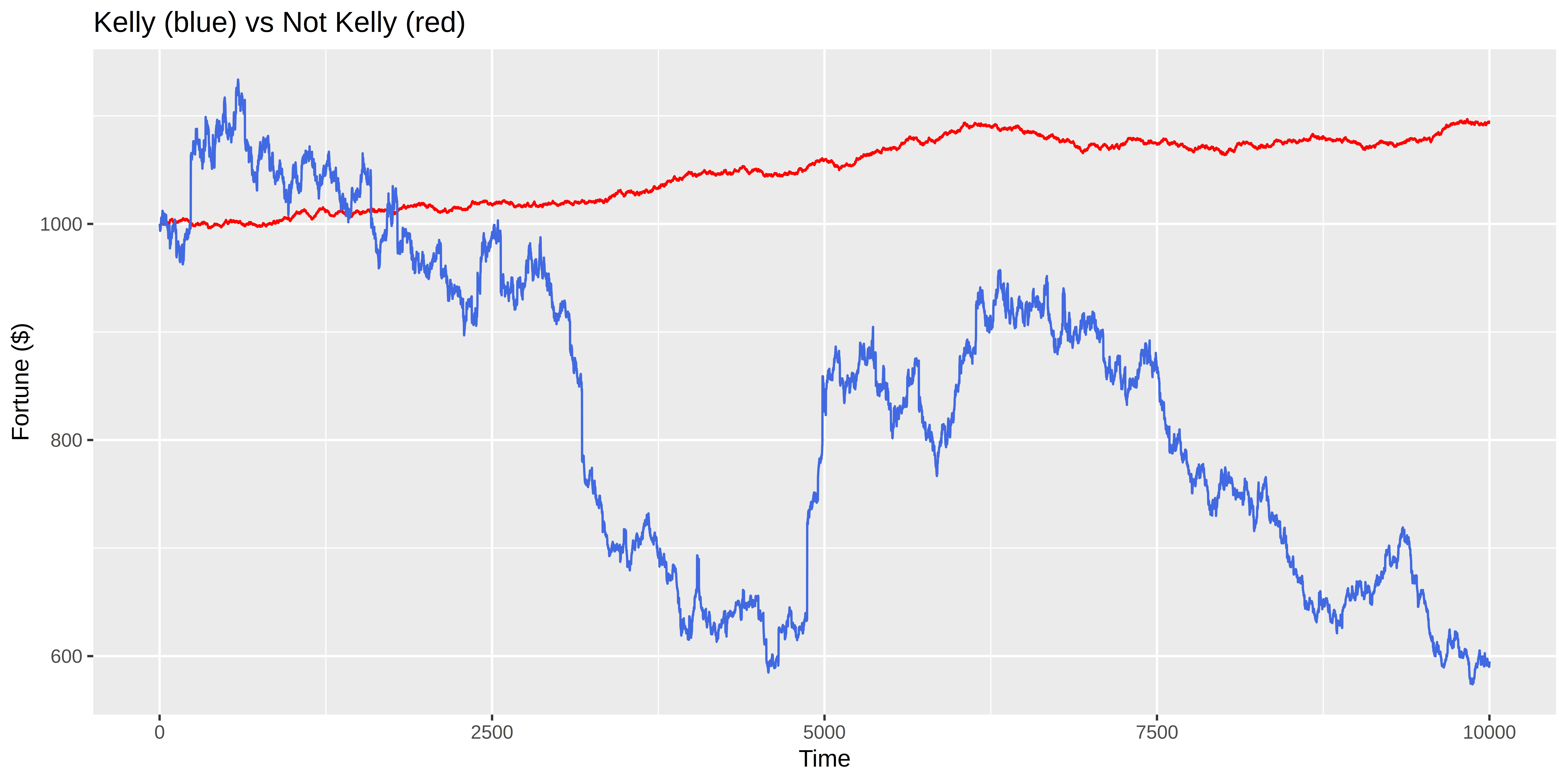 Some googling brings up: 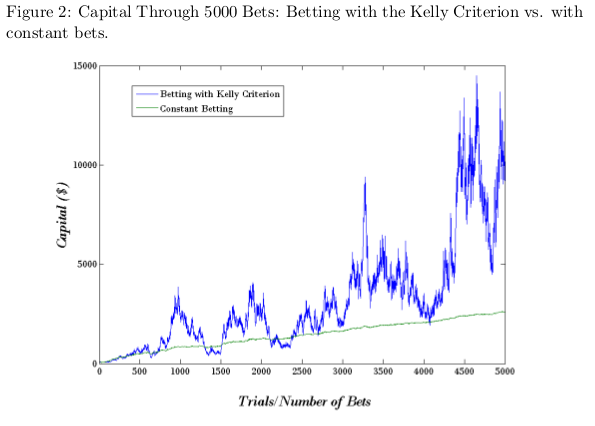 The consensus seems to be that using the Kelly criterion is nerve-wracking. Additionally, if your subjective probabilities are not well calibrated, you loose your money faster.

Recently, a friend of mine was talking about how (80% of) his job at Google is to mediate between different teams. One team wants to do a Thing, and for that, they have to use a Tool developed by another team. So he goes and reads around, and doesn’t find how to do the specific thing they want to do. So he talks with somebody from the Tool team, and they direct him to a particular piece of documentation, which deepens his understanding of the Tool. Eventually, though, he realises that there is still no actual way to use the Tool to do the Thing, and he goes back. So the Tool team tweaks the Tool a little bit so that it’s possible.

The above takes three months. If a computer engineer at Google gets paid $100,000 per year, that’s a noninsignificant amount of money spent because knowledge integration isn’t perfect. One might think that an AGI wouldn’t have that problem, at all, though note that it would have to be different from current narrow uses of AI, for which these problems abound.

Benthall claims to have refuted Bostrom’s argument. His case rests on a classification of the factors which take part in the making of a prediction, which he claims to be exhaustive: Accuracy (Fidelity to the Bayesian algorithm), Speed, Prior and Data. We have shown that it is not exhaustive, and explored two additional factors: granularity and knowledge integration.

We presented a toy scenario in which two players are perfectly accurate, but one is able to extract more granularity. Note that this can be the case even if both players have access to the same information. In this scenario, the second player can take advantage of the first player, extracting money through a series of bets which appear to be fair.

Furthermore, another important part of his argument is that recalcitrance in the limit is, in some sense, informative of recalcitrance thoughout. Even taking this into account, we see that just a small improvement in granularity can result in an exploitable advantage. The analogy to high frequency trading is made, and we construct a toy world in which the player with more granularity takes over.

It is not our hypothesis that computers will rule the world because, like a Spock or a Brainiac, they will be able to differentiate between 52.23479270% and 52.23479275% and shout “No, that’s inconceivable” just as Kirk or Superman thwart them. Our remark goes more in the direction of: